In my new novel (“THIS NEVER HAPPENED“), I’m exploring the novel-within-a-novel concept. Stop me if you’ve heard this before. It’s true, I already did this in my second book (“THE FALLING“). In The Falling, my main character (Tommy) is a novelist whose debut work (“BLANC“) was essentially a detective story set in 1940’s New York. Tommy based the detective character on himself while modelling the amnesiac serial killer he was chasing after an old friend (Patrick) who Tommy had been harboring negative feelings for. When Tommy gets it into his head that Patrick has returned after ten years in a grand act of revenge, he also decides that Patrick is using the scenes in Blanc as inspiration. I used three “excerpts” from Blanc and placed them sporadically within The Falling, at points in the story where Tommy’s feelings might be justified by the reader. But these were also scenes that intended to help readers better define the true nature of Tommy’s and Patrick’s close relationship.

But where the fictional novel within The Falling served the story as non-linear character development, my new story utilizes the concept in a very different way. 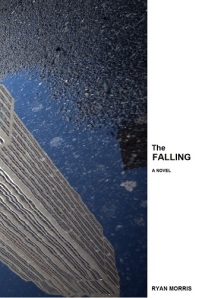 In This Never Happened, the protagonist (Epic Small) is riding the F-Train through Brooklyn when he finds a tattered copy of a book on the seat beside him. Below is an excerpt from Chapter Four of my book:

“The novel is entitled The Third. The cover is a painting of two identical left forearms, with their wrists facing out. Somebody has defaced the cover with a bright green marker, having drawn juvenile slits along the wrists with blood streaming out. Like they are bleeding pesto or possibly belong to some sort of space creature who has assumed the form of a man. Checking the front matter, I discover this is an English translation of a French novel by the author Jean Trepanier, first published in the Seventies. This translation was published a few years after that. The back cover offers no synopsis, no indication of what the reader might be in for.”

Epic begins reading the novel right there on the subway, and realizes without a doubt that this is going to be a confusing tale. It is a story about twins, though the two men (Tristan and Luca) share no relation and don’t really look alike. The fictional author (Jean Trepanier) continues to describe Luca’s physical features differently; he’s Chinese, he’s an Eskimo, he’s a little girl, or he’s morbidly obese. There’s no rhyme or reason as to why the descriptions change but the reader and Tristan and all the secondary characters are meant to simply assume they are identical twins. Luca proposes that the two men switch lives, and without much of an argument from Tristan the two swap jobs, apartments and girlfriends.

The Third is written in a way and perceived by Epic to be something that is worth questioning. Is this a real book? Was it intentionally planted on that subway for Epic (and him specifically) to discover? And in another twist, when Epic discusses the strangeness of this book with his therapist (Gideon), it turns out that Gideon has read it too. But Gideon’s version of The Third is a little different: there is a whole other character in his version, one that does not exist in Epic’s: a third twin (er, triplet, I suppose) plays a key role in this alternate version, and his name is simply The Third. Why the divergences in the two books? Who holds the “correct” version? These are all questions that I’m hoping readers will ask, but ultimately, the two copies of The Third play a key role in the bigger picture of This Never Happened. They serve as clues towards the secret within the entire story.

Still transitioning from the outline-to-writing stage, my goal is to have This Never Happened completed at the end of 2014.